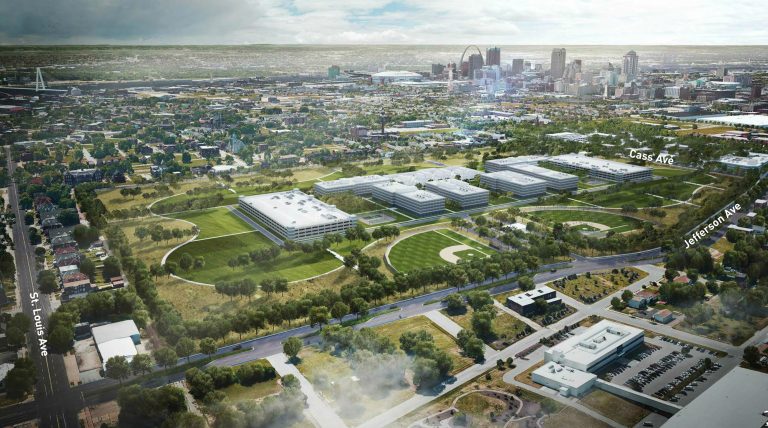 In fall 2012, the National Geospatial-Intelligence Agency (NGA) began to search for a site for its new NGA West headquarters. Soliciting proposals from many potential locations, the search was narrowed down to six sites after two years. Among those sites was a 134-acre parcel within the NorthSide Regeneration boundary. This site distinguished itself from the others due to its large-scale, contiguous property assemblage and proximity to an urban downtown region replete with local businesses, transportation, neighborhoods and amenities. Subsequently, after further research and analysis, NGA selected the NorthSide Regeneration site, which was reduced to 99 acres at the northeast quadrant of Jefferson Boulevard and Cass Avenue. As a result of this site being selected, 3,100 NGA jobs will stay in Missouri and St. Louis, eventually increasing to more than double that in the ensuing years. The economic impact of winning and securing this project will be felt for many generations to come.

During the last two years, the site has been environmentally cleaned, prepared and turned over to the NGA, which is now moving forward with its $1.75 billion project with the announcement of its design-build contractor expected in spring 2019. Soon thereafter, construction of the facility will begin with an expected completion of all buildings by 2024. The NGA project is a most fitting anchor in the NorthSide Regeneration development and is emblematic of the transformation already visible in new commercial, retail and residential projects nearby. NorthSide Regeneration continues to be the catalyst for renewal, spurring new opportunities that reshape these long-neglected, blighted areas into the productive and sustainable communities of the future.